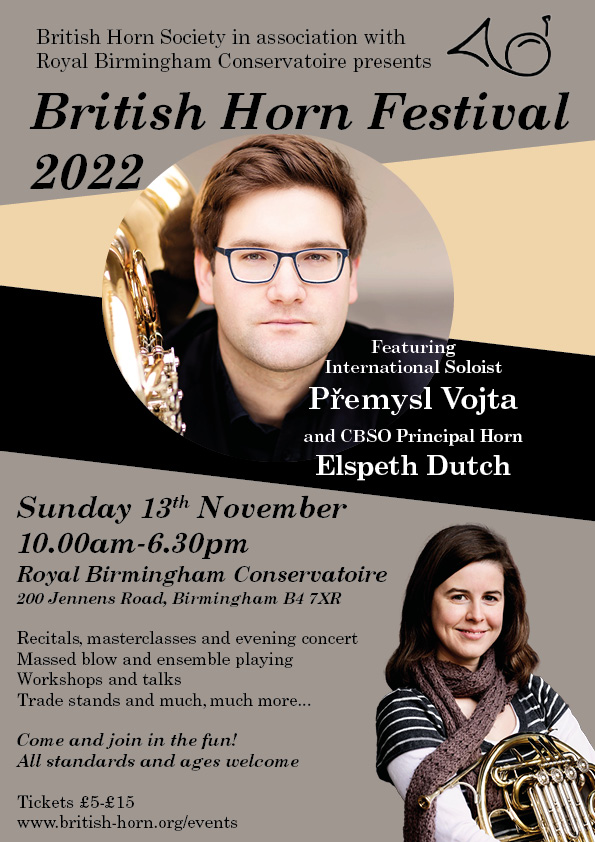 We are pleased to announce that tickets for the 2022 British Horn Festival on Sunday 13th November in Birmingham are now on sale. As it’s our first live Festival in three years, tickets are priced at £5 for BHS members. Grab yours now to avoid disappointment!

Get you tickets here: https://www.eventbrite.co.uk/e/british-horn-festival-tickets-419902629067?utm_campaign=post_publish&utm_medium=email&utm_source=eventbrite&utm_content=shortLinkNewEmail

This promises to be a day with lots of variety of all things horn-related!

There will be an opportunity to perform in horn ensembles plus a massed horn blow in the evening concert in keeping with tradition!

Workshops on how to maintain both body and instrument as well as introduction to the natural horn and pedagogy.

It’s the first time we’ve been able to meet since Guildhall in 2019 so do come and join us for a great celebration of the horn.

Přemysl Vojta, winner of the “International ARD Music Competition” 2010, tours worldwide as a soloist. He was awarded the prestigious Beethoven Ring, past recipients of which include artists such as Igor Levit, Lisa Batiashvili and Gustavo Dudamel. He has received much international acclaim for his exceptional album productions, including one complete recording of the horn concertos by Joseph and Michael Haydn, and his album “Metamorphosis”, which was recorded using three different types of horns.In October 2021, Přemysl Vojta was appointed as a professor of horn at Folkwang University of the Arts in Essen to succeed the horn legends Hermann Baumann and Frank Lloyd. In the past, he has also taught at Berlin University of the Arts and the Cologne University of Music and Dance.He studied at the Prague Conservatory under Bedřich Tylšar (1998 -2004) and at Berlin University of the Arts under Christian – Friedrich Dallmann (2004 – 2010). While he was a student, Přemysl Vojta had already started his career as a principal hornist at the Berlin Konzerthaus Orchestra, and continues to hold the same position at the WDR Symphony Orchestra in Cologne since December, 2015.Vojta is a member of the Carousel Ensemble, Philharmonia Octets, Breeze Quintets and Dispar Trios.

Elspeth Dutch, featured in the last edition of The Hornplayer magazine,studied with Richard Bissill, Hugh Seenan and Jeff Bryant at the Guildhall School of Music & Drama and upon graduating in 2002 was appointed 1st horn of the City of Birmingham Symphony Orchestra where she has remained ever since. She has played with many of the UK’s top orchestras and has performed as a soloist and chamber musician on numerous occasions both in the UK and abroad. She is a horn tutor at Royal Birmingham Conservatoire and has given classes at Guildhall School of Music and Drama, the Royal College of Music, Trinity College of Music, Wells Cathedral School and Junior Royal Academy.