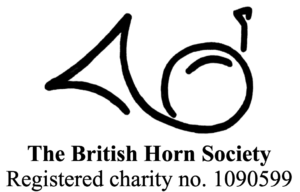 The title of the Society shall be the British Horn Society (hereafter known as the Society).

The object of the Society is to promote and advance the education of the public in its appreciation and knowledge of music with particular reference to the horn as a solo instrument and in orchestral and chamber music.  In furtherance of these objects it may promote concerts, lectures, festivals, meetings, books, magazines, pamphlets and other literature.  It may also provide, and seek to encourage others to provide scholarships and commissions for new works, and undertake other projects as appropriate.

a) The financial year shall end on 31st December.  Subscriptions are collected by the Charities Aid Foundation on a regular basis as and when they become due.

b) A banking account may be opened in the name of the Society, with the permission of the Trust, and cheques shall be signed by the Treasurer and one other member of the EC.

c) The Society may receive donations, grants in aid and financial guarantees, and tickets for any or all of its concerts and other events may be offered for sale to the public.

Subject to the overriding authority of a general meeting of the Society, the interpretation of the Constitution shall be a matter for the Executive Committee.